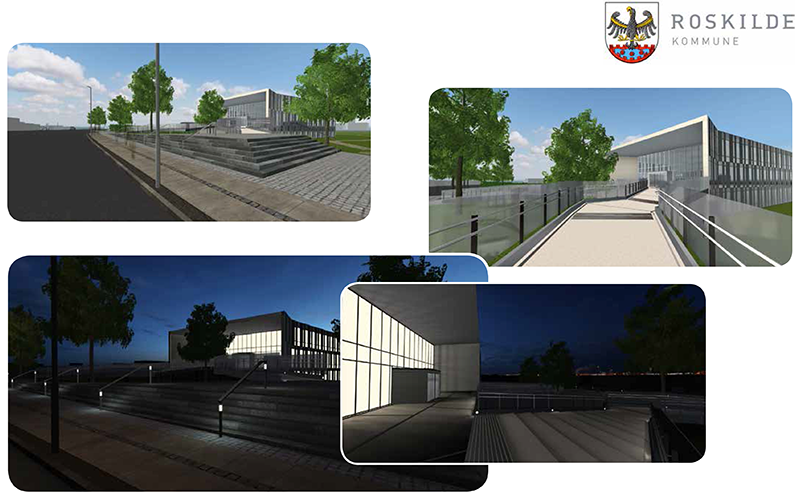 During the planning of Roskilde City Hall, the architects, landscape planners and the Roskilde City Architect had been stuck in the planning for 10 long months unable to realistically communicate to the decision makers how the new City Hall would appear and feel when approached on foot during both a summer afternoon and on a winter afternoon.

Furthermore it had been impossible to sufficiently illustrate realistically to the decision makers how certain aspects of the building would be looking depending on the decisions made for some of the materials in the outside entry area of the City Hall.

Apex made an interactive visualization in where we allowed the user to walk around the outside city hall environment in daylight and with the option to swap to winter darkness – the light set accordingly with the actual sun angles and colour of the light blend on this altitude/latitude at the chosen time of day.  We designed the landscape according to the landscapers topographic numbers, and we gave the user an easy option to swap between the materials that needed to be decided in the entry area, to allow the user to see it from all possible angles and in different time of the year..

Just 14 days after delivery the final decisions had been made and the work could continue.

The Roskilde City Architect stated that he had become the most popular guy in the city hall with everyone flocking to his office to try the interactive environment – he was happy it was digital – otherwise it would have been worn down in no time.